She notices everything—the dimples on his knuckles, a replaced button on his collared shirt, his blond lashes. He lifts his eyes to her briefly, then down to his bowl and back up again; his little fingers curl around the spoon and hold it for long moments before drawing it to his mouth.

She reaches across the table and places her hand on his. He flinches but leaves it there.

“Are you done eating?”

“Would you like a bath?” She shouldn’t ask so many questions, or he’ll feel interrogated.

She stands and smooths her skirt then puts the kettle on, though she has no reason to. She fills the sink with hot, sudsy water for his one small bowl, small glass and spoon. Her hands are shaking, and she doesn’t want him to see.

“Your mother and daddy treating you alright?”

He twists back and forth in his chair, nodding his head. He’s restless.

“Well. No matter. I already know they treat you well; I’ve seen that room full of toys.” She looks back at him and smiles. He’s twisting faster now, as though trying to make his chair spin, his brown leather shoes hitting the leg of the table. She remembers these moments from childhood, when her own body was too small to contain the electricity that coursed through it. When adults talking sounded distant and dull, and she was ready to burst through her skin.

“Why don’t you go play.” Her intention was to offer understanding, but she fears the words came out of her mouth too quickly and sounded impatient.

He skitters off his chair and up the stairs. She looks at the empty steps, worn swayback from three generations of Sutherland feet travelling them. She feels water on her foot and realizes her wet rag is dripping.

Her parents come home after he’s asleep, and she’s too ashamed to admit that she sat at the kitchen table listening to him play until he grew quiet, then sneaked upstairs and watched him, snoring amongst his toy soldiers on the floor. When she carried him to bed he was heavier than she expected and smelled like warm earth and vegetable soup.

“How’d your brother do?” her father asks, always sure to reaffirm where things stand.

“Good, good.” He pulls his wallet from his back pocket and thumbs through the bills.

“No, no. I insist.” He hands her money, and she sets it on the coffee table. “It was a real treat, your mother and I going out. We never get a chance anymore.”

“Honey, you look tired.” Her mother steps through her coming-home routine—brushing off and hanging up her coat, checking the pockets (always empty), setting her shoes with toes forward just under the coat, placing the car keys that her father tossed onto the hall table into the glass bowl on the hall table, checking her hair in the mirror, and then stepping into the living room. “You should go to bed, it’s an early bus tomorrow.”

“What time does he usually wake up?” She should have said goodnight, at the very least.

“Oh.” Her mother waves her hand through the air. “It won’t be until after you two have left. Isn’t that right, George?”

“Yep, bright and early.” Her father collapses into his wingback chair. The swag lamp casts a warm circle around him, as though he’s in a one-man play. “You packed?”

“Not yet.” She walks up the worn stairs, past his bedroom where she had put each tiny metal soldier back in the box, and into her old room, still pink. She has the strange thought of her little-girl room next to his little-boy room and wonders if they would have been friends if time had warped it in their favour, or mother and son if the world were different. 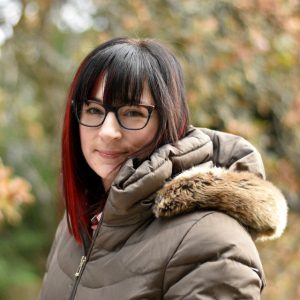 Angie Ellis lives on Vancouver Island where she is finishing her first novel. She has current or forthcoming publications in Narrative Magazine, Passages North, (b)OINK and others.