They said the old woman ate children, but I never believed it.

Children disappeared; it’s just something that happened. Some wandered too close to the steel mills or the lake. Others were snatched from the park or on the way home from school. And some simply ran away. Anything to escape the taunting, the fists, the pollution that painted the sky orange and coated our world in coal-black dust.

But no cold splash of reason would make people change their minds. Take them across the sea to a new world, and they’d still clutch at the same tales, the old gods. It didn’t matter if, back in the old country, they’d never really believed. Here, thousands of miles from home, it was all they had left.

Old Mrs. Jakubek had less than most. She’d lost her children years ago to disease, starvation, or whatever else had ravaged the old country after war swept the Magyars away. Only a grandson supported her now, the infant she’d once lugged around the ship sprouted into a man who’d gone to the distant West to claim worlds of his own. Alone, she kept to her bible, her garden, her endless list of adages. Her face was a study in suffering: bones prominent beneath leathery skin, black eyes bulging from their sockets, jaw hollowed where the teeth had gone.

Surely, I told myself, someone who ate children would have more meat to them. Or at least enough teeth to chew with.

Of course, there was nothing to say she wasn’t a witch. Maybe witches here didn’t mind hobbling down to the grocer’s thrice a week. Maybe they muttered curses at speeding Studebakers and liked the taste of root beer.

She lived at the end of our street, overlooking the Red Hill Valley where the strawberry patches cut into the woods. Her place was an eyesore, more frayed at the edges than the other post-war homes. Plants sprouted from every square inch of her yard: every imaginable vegetable and herb, and so many poppies in late spring that her garden looked like a battlefield or a firebird’s wings.

Against the ravine, she kept a clandestine flock of chickens that scratched between the rows of onions, well out of sight. Her coop balanced precariously on knobby, thin stilts; and if you squinted the right way, it seemed to sit on chicken legs. She told me—the eldest, the responsible one—that it kept out the local fox. The younger ones preferred to think the coop would shake itself from the ground and set off on its own one day.

“Just like the witch in the stories!” Little Mirko said, bouncing from one foot to the other.

We all laughed, taking turns to peer through the blackened slats of her fence at the little chicken house. Yes, even I, who knew better. Mirko basked in the glow of his little victory.

Later, I heard his mother calling for him, her voice swallowed by the night.

The curtains of their house remained shut the following day with neither movement nor light filtering through the cracks. I passed it that evening on my way to visit Mrs. Jakubek as she read her bible, its crabbed Gothic letters blurred with use. Mama never worried how late I stayed; they were distant cousins, like everyone from the same village seemed to be. It was enough, though, for Mrs. Jakubek to insist that I call her Babička. That, and the fact she wanted to save me for her grandson, her “dear Kostêj,” who worked on a horse ranch in Alberta. She claimed that, by the time I’d be ready—“not long now, Marya”—he’d have made enough to buy a kingdom, an empire, a whole universe. And there we’d lay waste to all the armies of life and death, with nothing between us and the endless sky.

I dreamt of that kingdom as I chopped the strawberries she’d picked that day, my fingers stained red.

“You must stay away from that Ivan.” Her words shattered my fantasy. “Like all Ivans, he is trouble,” she continued, ever pleased to blame the boy next door. “Steal my chickens. Steal your heart.”

My hiccoughing fit brought her to her feet, shaking her head.

“Nie dobré. Your belly so delicate, just like a princess.”

Out came the little glasses and the famous cure-all: her own magic brew of wormwood leaves floating in an unmistakable clear liquor.

“One glass,” she said, wrinkled face crinkling in a smile. “And all will be well.”

There was never a way to refuse. And somehow, I didn’t want to. This was the way it had been, the way she’d always known. It raised the ghosts of a world that existed only in the stories—where firebirds sang and the Deathless roamed and Baba Jaga nibbled by candlelight on a child’s knucklebone.

I wanted a taste of that old world. They always spoke of it, revered it as they’d once the gold-paved streets of Canada where any man might be his own cisár. But here they trudged down the tarnished streets after full days or nights, hardly knowing the difference. And we, their new world children, suffered the insults, the mocking laughter for our funny round faces and incomprehensible last names, relics of a country we’d never see.

Trapped between fairy tale and disappointment, I knew which I’d choose.

My throat still burned as I stumbled out onto her front step, my head reeling from the bitter drink. The full moon had transformed the street into an ancient, wild landscape, deepening the shadows where monsters lurked. From the ravine rose a desperate moan—the wind through a rock crevice, a dying creature’s last breath. I turned my back on it, almost at a run.

Dawn brought me to the strawberry patch, the sun’s rays just starting to warm the edge of the field. They banished the night world to the other side of the creek, where hollow trees filled with imps rattled in the breeze.

“In the half hour before others would arrive, I could take the ripest, sweetest berries for “Babička’s jam and enjoy the equally sweet silence of the city at dawn. Traffic grumbled across the bridge at Queenston Road and workers in the houses above were shuffling out their doors, but here in the valley, I could still cling to my dreams, if only a little while longer.

I squatted in the straw, bathed in the light of a red dawn like Marya Morevna among the fallen armies, until my hands found nothing beneath the itchy leaves. The end of the first row was plucked clean. I frowned at the ripped stems and red-stained straw, and struggled to my feet.

A little sob broke the birdsong, the hum of city traffic.

I started toward the valley wall, where, just beneath the edge, a shelf of rock thrust out from a blanket of last year’s leaves. Things came together, then. The night sounds, the broken stems. A hungry child’s cries in the darkness.

The changeling hunched beneath the rock, eyes wide, shoulders quaking.

“Mirko?” I knelt and reached into the shadow.

A small hand touched mine, fingernails caked with strawberry seeds. He was so pale after two nights alone, but when I pulled, he retreated further into the shadow.

Heart thumping between my bones, I glanced over my shoulder.

Smoke rose in a great plume above our heads, above the whole city, it seemed. Beside it a smaller flame licked at the clear, morning sky, tasting the air for the essence of human flesh. The body was hidden behind the tops of the trees, but surely it was there—a great sarkan with scales of forged steel and teeth like iron nails to crunch on the bones of all the missing children.

The sight held me captive for an impossible moment before my foot slipped, and I saw too the rows of smokestacks, puffing soot and steam into the air.

One dream too many.

Before I could explain, Mirko pointed again, this time to the path.

Mrs. Jakubek paused at the brink of the hill, black scarf tied fast beneath her chin, old black dress hanging from her bony shoulders. She peered down at us, then over at the steel mills that knew no sleep. They were this country’s own kingdom of the Deathless, where our fathers laboured in the glow of melted ore, the dragons raging within.

The explanations crumbled in my mouth. Maybe Mirko was right to be afraid.

A tuneless chant on her lips, Mrs. Jakubek set down the baskets and turned her face up to the sky. Raising her cane in one gnarled hand, she jammed into the dirt so hard that I thought the earth would shake beneath us.

At first, there was nothing. Just the birds and the rumble of cars, but the light began to soften. Soon, the blue sky was blotted out by a grey mist so thick you lost your own hands. The thick scent of old fish and sulphur filled our lungs, churning our stomachs. Mirko turned a shade paler, clutching at my arm as the smokestacks disappeared, the dragon vanquished.

We sat among the rotting leaves, unable to look away.

The old woman hobbled down the hill, muttering under her breath. 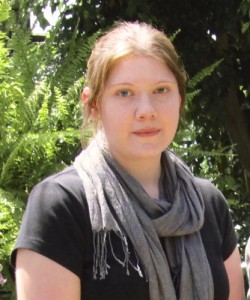 Susan Hroncek is currently completing her doctorate in Victorian literature and science at Wilfrid Laurier University. A descendant of Slovak and Dutch immigrants, from whom she took her inspiration for this story, she lives in St. Catharines, Ontario.