“It’s your fan belt,” the mechanic says. He has dirty hands and clean hair, a lopsided smile and good teeth. He charmed the older sister, Odelia, when he leaned over the engine and raised his pale green eyes. Young and cute—so cute he doesn’t have to be tall or rich. Odelia squeezed among the tools and grime, clearing a place for her pleated skirt. Now she sits on the counter swinging her feet, watching his T-shirt mold to his muscled back.

He straightens up and asks if she wants a soda to go with her soda-sipping pose. “Love one,” she says, an unintended imperative.

He glances at the younger sister, Jennifer, on her feet backed up against the wall, arms crossed and clutching herself. “You want anything?” he asks.

“No.” Her head shakes like a shudder. She stares at the fog outside and asks, “What’s down the road?”

The mechanic’s boss shouts from the back room—he’s older, wiser, listening in—“You don’t want what’s down the road!” He steps into the garage, wiping his hands on a red-checkered rag. Beefy, balding, married with children. “They call it the broken village,” he says. “People don’t come back from there.” It’s like he knows she’ll head straight over.

And she does—the little sister, Jennifer, the quiet girl—she steps right out the door.

Odelia hops off the counter and calls into the fog, “Jennifer! Jesus!” Over and over until finally she lets the door close and mutters, “What is wrong with that girl?”

Jennifer enters the village in small, hesitant steps. It’s a tiny place, just a few crooked streets streaked with tears. In a one-windowed shack, a child wails at a televised advertisement for the same toy truck that lies in pieces at his feet, the loader missing, the doors ripped off. The boy picks up the wheels and axles, sobbing. His parents stumble into the room. They don’t roll their eyes or sigh. No secret smiles pass between them, no “This-again?” mumbles, no shouts to grow up. They hug their child in silence, nodding, while he sobs because nothing ever fits together. Jennifer watches as his cries slow to gasps, then moans, and in minutes he’s asleep in his father’s crooked arms.

On the sidewalk ahead, a girl crouches low and weeps, rocking on her heels, her arms around a baby blanket wet with sorrow, sharp with bones and bits of her own insides. A dozen villagers limp over to envelop the mother and lost child. They rise from shredded couches and wobbly stools, and leave their front doors swinging free. They crowd the sidewalk to take the grieving girl in their many arms. They don’t patch her up or turn her thoughts to happy things. They don’t compare their own sodden blankets. They just hold her and her grief until the weeping stops and she lays her blanket on the earth and sits beside it, writing in a journal with a broken spine. Her neighbours limp away.

One woman drags a foot over the threshold of a corner store, its plate glass smashed, its neon sign an orange “M.” She buys a crushed loaf of bread and carries it to the park across the street, where she sits on a split stone bench and feeds blackbirds that drag their wings. A girl with one arm joins her, speaking broken English, her teeth spilling out with her words. A man at the fountain beside them is just a few pieces—a thumb, the left kneecap, a lock of hair. His wife carries him in cupped hands. She has never loved him more.

Jennifer thinks this is where she belongs, this village that could be a dream. She walks through the door of a dim café and sits at a lopsided counter. She runs a hand over brown burns that ripple the laminate as she prepares for questions: Where did she come from? What does she want? What are her qualifications for existing here?

She knows there are people who empathize too much with the sufferings of those they read about, victims of atrocities and unimaginable torture. They dwell in the pain of the images they create. They acquire PTSD without the T. She never intended to become one of those people.

Across from her, an old man with a caved skull raises a cracked cup and says, “Be it resolved not to do more experiments wherefore we don’t change our ways with the results.” He coughs and shivers and shouts, “Did they help anyone raise a baby after they made those broken monkey mothers? No. They did not.” He weeps for the mother who broke him, his tears as brown as tea on his shattered face.

Jennifer rests a hand on the old man’s arm and lets him weep himself to sleep. She sits in silence, picking at the burnt countertop and collecting its fragments into a pile the size of her thumbnail. She smiles to see that her nail polish is chipped. She does fit in here. Her sister painted her nails last week, before their road trip, before the motels and bars and strange men leering and Odelia sulking each time Jennifer pushed them away. She’s no fun, this girl, this Jennifer—Jesus, what’s wrong with her? She must be broken. She drinks from a chipped cup that no one throws out or exchanges, and she wants to drink here every day.

She waits for someone to expose her wounds as paint, kick her out into the fog where everything is whole. She has one answer for every possibility. Tragic accident? No. Bullied in high school? No. Parents beat her? Friend committed suicide? Boyfriend betrayed her? No, no, no. She doesn’t know how she broke, how fissures spidered out from some chipped spot she could never get a fix on. Somewhere between her bedroom full of adventures and heroes and true romance, and the living room where her parents sat out their lives watching killers and rapists and dirty cops, she tripped down the stairs and fractured something that just kept breaking.

“It’s good to find this place,” she says aloud.

A woman who looks like her mother after a car crash whispers in Jennifer’s ear, “Love is the answer. Always.” It comes out gibberishthe woman has no tongue, no palate—but that doesn’t matter. Jennifer understands. The woman leaves her smiling. No proof is demanded. Just being here is enough.

Jennifer’s arm hangs twisted at her side, crooked at the elbow and curved along the radius so that her palm faces outward as it dangles down. Maybe it was always like this, she thinks. Or maybe everything is contagious and we are all a race of mimics. In a can-do world, she wonders, what do all the people who can’t do do? It sounds like a nursery rhyme so she repeats it aloud like a little girl, over and over, to soothe herself. A chunk of her hair falls to the floor when she wipes her eyes. An earlobe and a patch of skin fall after it. They drop away from her and it feels good to let them go, to stop trying to pull herself together.

Her sister pulls the car up in front of the café and kills the engine. The impression of the cute mechanic is in the back seat, and their bags are in the trunk. Odelia yanks the door to the café off its hinges and marches inside to retrieve her little sister, to drag her screaming out of this place. For God’s sake, they’ve got three days left in their vacation. But the sunny sister’s path is blocked by debris that falls from the ceiling, and her shouts of “Jennifer! Jesus! It’s a great wild world out there!” bounce back at Odelia in a scream that comes from Jennifer’s mouth. They lock eyes across the filthy room, and it is understood down to the bone—undeniably true—people don’t come back from here.

Jennifer leans against the counter and watches her sister give up on her. Odelia’s face contorts in the horror of being alone. Jennifer lifts a hand in front of her own face, palm outward as if to ward off a blow, then she waves her sister away, slowly, like a nutty old woman telling her to go to hell. Odelia exits on a frown, worried and perplexed, her skirt twirling mindlessly, keys swinging in her hand. She gets in the car and drives away, disappears into the fog.

Jennifer falls to pieces on the counter as she hears the engine fade. It’s fixed now and runs fine. It has a rattle, that’s all, but it’ll last a lifetime. 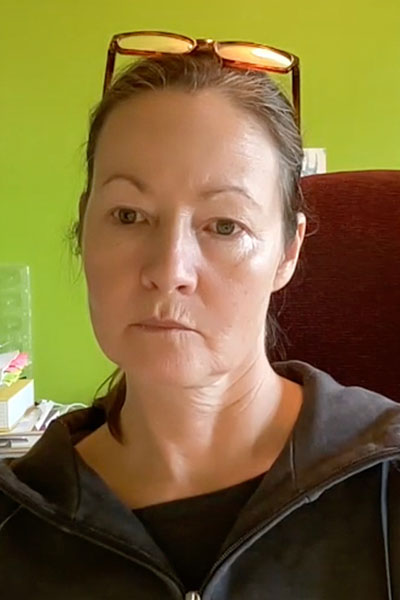 Catherine Austen writes books for children, short stories for adults, and reports for corporate clients. Her stories have appeared in The Fiddlehead, The New Quarterly, Carousel, and other journals and anthologies. She lives in Gatineau, Quebec.
Visit her online at www.catherineausten.com.
admin2022-12-15T14:14:30-05:00