On an October afternoon—air clear as a bell, yellow leaves twirling down—I sipped coffee on my deck, soaked in the sun’s weak autumn rays. And got the news via Facebook.

Your sister Alma and I haven’t seen each other in almost forty years, though we “like” and “share” each other’s posts. “We are heartbroken to say,” she wrote, “that our dear brother Rob passed on Tuesday.”

Jesus. What? I took a breath before I read more, pulse pounding in my ears.

“A celebration of Rob’s life will be held at St. Gertrude’s Church on October 19 at 7pm.”

I stood up, paced mindlessly for a minute. Had a glass of water. Cursed. Read it again a few times in case I’d missed something, like maybe it was someone else—some other Alma I knew in high school who also had a brother named Rob.

You weren’t the first of our little circle to “pass,” as Alma put it. Margo swallowed pills while still in high school; Ben veered onto the wrong side of a country road late at night; Duane did a Jimi Hendrix, passed out at a party. As we all got older the toll became more predictable, the kinds of fate associated with aging: cancers, heart attacks, strokes.

When our old friend Matt passed a couple of years ago, it hit me hard. You and I talked about it briefly, again on Facebook.

“Lung cancer. Couldn’t have seen that coming,” you said.

“It was inevitable the way he smoked, that’s all. No surprise. Nothing we can do about it now.”

I’d forgotten how cold you could be. Later, when my anger had softened, I thought perhaps you were in shock, or masking your feelings. As was your wont. You and Matt were close at one time, so close that people talked. Not that you and I had been close recently—I wonder how close you ever let anyone get—but it’s been clear to me for a long time that you dealt with intimacy by minimizing it, pretending it didn’t happen.

I wish I had understood that when I was eighteen.

Winter night. Kitchen party in an ancient, run-down rental house downtown. Some came from clubs after seeing bands, some after a movie at The Plaza. They kept coming and coming. The kitchen got crowded. The music got louder: Eat to the Beat, a new album just out. We stepped, you and I, into the unlit back porch, sat on a stack of boxes, far from the madding crowd. The music now muffled, Deborah Harry’s ice-queen vocals on “Sound-A-Sleep” a background lullaby for an all-nighter. Frost-whorled windowpanes silhouetted us as our words formed clouds in the purple hush.

Jobs, family, moves. I eventually had the jobs and the family; you were the one who moved a lot. You left town and came back how many times? The first time felt like it would kill me, and for many years we’d lost touch. But somehow, as time goes by, there seems to be a pull from the past—for no other reason than to prove to yourself it really happened, for better or worse. Or maybe it’s an attempt to remember being young. Whatever the reason, our paths crossed a few times in the last ten years—purposefully, accidentally, sometimes both. And then social media came along and made it far too easy, far too instant, to share bits of our lives, to react blindly to news, even personal news. And to stay connected, sometimes daily, with people that in previous eras you would have long ago forgotten.

Though I don’t expect that would have happened with us.

To many people, music is background noise. A few don’t notice music at all. To me, that would be like being dead. I am always aware of any music I hear, and how it makes me feel. One day after work while in high school, my brother had picked me up. It was hot, dusty work, packing boxes and stacking pallets in a windowless warehouse; and the drive home was long. The opening notes of a song I hadn’t heard before drew my attention to the radio, so I turned it up.

The sustained bass notes, the tambourine, the tinny Rickenbacker guitar all suggested The Byrds, 60s folk-rock, not the overproduced, synthesized AM radio pap that was pop music in the early 80s. If I loved the sound of the song, I loved the lyrics even more. I felt as though they were directed at me, like my wait was over and finally I was getting something going with you. That evening you and I would go out again, to another movie and then back to your place.

“That’s a new song called “The Waiting” from Tom Petty and the Heartbreakers,” the DJ said.

That day I didn’t know that in only a few short weeks, you would leave town for the first time, that what we had going would be finished almost before it had begun. My heart was soaring so high that I could hardly believe it.

I hadn’t been inside a church in many years, not since my father’s funeral. And my mother didn’t want a funeral; she asked us to scatter her ashes in the sea. St. Gertrude’s, as it turned out, wasn’t St. Gertrude’s anymore but was now called the Gaia Community Gathering Centre. The celebrant, who introduced himself as Gareth, was much younger than us; he wore a plaid flannel shirt and wire-rimmed glasses. His eulogy was about you, I suppose, but very little of what he said was specific to you; he was reciting comforting platitudes that sounded as though they’d been lifted from self-help books and inspirational social media memes. “Let yourself feel all the emotions around this grievous loss,” he counselled, “and then release them. It’s what Rob would have wanted.”

Seriously? It’s what you would have wanted? I never recalled you giving much of a damn about other people’s emotions. Clearly, someone wanted a service—Alma, perhaps—and they got one. But I couldn’t imagine you wanting any of this yoga-class-cum-memorial service.

As Gareth continued my mind wandered, and my eyes fixed on the urn beside the altar. The last of you. People all around me were crying; and I felt like I should too, but the tears didn’t come. Proof, I thought, that I was at last well and truly over you.

A small part of me welcomed the chance to reconnect in person with some of our friends from the old days, but the rest of me was dying to get away from all these people I didn’t know. Even those I had known—it was so long ago, we might as well have been strangers. And then there was your family, who besides Alma I’d never met, and some of the many friends you’d gathered before and after the brief part of our lives that we had shared.

Before the crowd began streaming out, I decided I couldn’t join them at the wake, even though Alma had invited me. Alma’s long hair was still dyed jet-black like she’d had it in high school. Somehow, though, her dingy black, thrift-store, Jackie O suit—edgy or ironic when she was eighteen—now just seemed odd as she approached sixty. None of us ever imagined getting this old, and we never imagined how quickly it would happen. It hit me that I had nothing to say to her or anyone else there; I just needed to be alone with my sadness. I slunk out before the service ended. Gareth’s voice faded as the double doors into the narthex closed behind me, and disappeared altogether as I descended the steps and slipped into the now-dark parking lot. I hadn’t cried, not through the entire service. I didn’t want to cry—not there, not then.

I pulled out of the parking lot and navigated through the unfamiliar suburban area. Once I got back to the main drag, I switched the radio on to quell the flood of thoughts in my head. The opening of the song was unmistakable: sustained bass notes, tambourine, tinny Rickenbacker. It was “The Waiting” of course. It wasn’t bad enough that you were gone; we’d also lost Tom Petty a week earlier.

I found an empty parking lot in front of a boarded-up music shop and stopped the car. I cried, not only for you and Tom Petty, but also for the innocent hope that song had brought up in my heart, the hope that had died so soon after. I was mourning what could have been.

Then another song came on, something so bland I’ve already forgotten it. Probably Phil Collins. I switched off the radio, dried my eyes, and drove home into that good night. 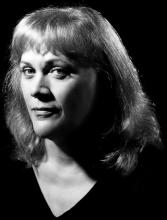 Lori Hahnel is the author of the novels Love Minus Zero and After You’ve Gone as well as a story collection, Nothing Sacred, which shortlisted for an Alberta Literary Award. A three-time Journey Prize nominee, her work has been published widely in journals in North America, Australia and the U.K.; her credits include CBC Radio, The Fiddlehead, Joyland and The Saturday Evening Post.