Cyril hands me a plastic package bound with duct tape. It’s heavier than I expect. This feels like a clandestine drug deal might. My giggle is stopped short by Cyril’s quizzical look.

“Me too.” He clears his throat. “I’m pretty sure it’s flour. With maybe some gravel and a few chunks of chicken bone for good measure. In the urn, I mean.”

I nod. Nonna would have made it look as realistic as possible, just in case.

I nestle the not-flour-gravel-and-chicken-bone package next to the mandolin in my bag. Low murmurs worm their way under the door, their bony fingers grasping at my heart. I want to slap them away.

My brothers are greeting mourners the way they did opposing teams at the end of all their playoff games—a quick handshake and a throwaway platitude as their eyes search out the next in line.

“You should probably go out there,” Cyril says.

They won’t let me die the way I want, those brothers of yours. I should just fill my pockets with rocks and wade out into the North Saskatchewan while I still can.

I wouldn’t have, though. They would have thought she was suicidal. They’d never been good at nuance, those brothers of mine.

I’d waited patiently for her phlegmy cough to subside.

It won’t help. Do something else for me?

Will it make those brothers of mine mad?

If they find out, yes.

I’d found another—child-sized, missing two strings, a toy more than a fine instrument—at the fourth thrift store I tried, handing over most of the meagre contents of my wallet.

At Union Station, I’d sat against a wall and tuned its remaining strings as best I could. A man dropped a five dollar bill at my feet. “You should put out a hat,” he’d said.

Instead I ate an apple, core and all, the way Nonna always had. Waste not, want not.

What do you want on your sandwich, mimma?

Anything but salami. Do I have to eat the crusts?

Every time you ask, and every time I say the same.

Waste not, want not.

Nonno doesn’t have to eat them.

I’d known, but it was the first time she’d said it out loud. When she set the plate in front of me, I lifted a corner of the bread. I hated salami. I ate it anyhow, crusts and all.

Nonna had insisted I take the train, bringing the mandolin with me.

You should see the country by train at least once in your life.

You can’t hold back death.

Watch me. You can fly back after.

When Nonno had died, I’d met Cyril Johnson, the funeral director, for the first time. He was a mountain of a man to my seven-year-old molehill of a self. I didn’t want to see him again.

The train had left Toronto just before midnight, two hours late. In the morning, I’d watched the forest whisk by, aflame in its colourful fall death. Only my ringing phone had dragged my eyes away.

“She’s gone,” Chris had said as soon as I answered.

I’d ignored the thickness in his voice and my own surge of grief. “Gone where?”

“You know what I mean. Where are you?”

“Sudbury. The train. She thought I had time.”

“They were cleaning up after euchre at the Legion. There was all this food left. You know how she is . . . was.”

“She challenged Arnie Smits to an eating contest. A minute and a half in, she started coughing and choked on a cocktail wiener.”

I’d known better than to laugh at the absurdity, though she would have approved. Oh, Nonna.

“What do you mean and? That’s it. She died, Amanda.” Definitely a sob this time. I’d almost felt bad for him.

The first time we met, your nonno told me that my body reminded him of a mandolin. I said, Who? And he said, What? And I said, Who’s Amanda Lynn?

At the cemetery, there’s a small hole already dug between Nonno and our parents. Chris stands behind me, his hands on my shoulders, flanked by Rob and Paul. As I bend to lower the urn—the maybe-flour-gravel-and-chicken-bone-filled urn—into the ground, Chris mistakes my silent, shaking laughter for crying and whispers, “It’s okay.”

He stays with me long after everyone else has left. I rub the plaque bearing our parents’ names.

“You were only two. You wouldn’t.”

Remember how you loved to wave to everyone?

Nonna ignored my feeble protest. Coming, going, a minute later or days, it didn’t matter. Except that once. When they drove Chris to university that first time, you stood at the window—your tiny palms pressed against the glass—and cried and cried. It’s like you knew they were never coming back. Have you forgiven him yet?

It wasn’t his fault.

I place the mandolin on the bank—the North Saskatchewan meandering by, silently witnessing my deception—and slit open Cyril’s package with Nonno’s pocket knife, pilfered from the junk drawer in their kitchen. It was still there among the bits of string and old pens, nineteen years after he last touched it. I carefully pour Nonna’s ashes into the mandolin’s sound hole and seal it with duct tape.

I stroke the long gouge in its face. The two stringless keys look naked next to their tightly wound neighbours. It’s a shabby vessel, unworthy.

I lay it gently on the water and push as hard as I can to where the deeper, faster current runs. The mandolin drifts downstream. Should have added some rocks, or pitched it in belly first. But then it turns broadside and slowly begins to sink, its shoddy construction taking on water like a wounded ship.

As it slips under, the neck waves gently back and forth in a strange, eight-stubby-fingered farewell.

And I wave back. 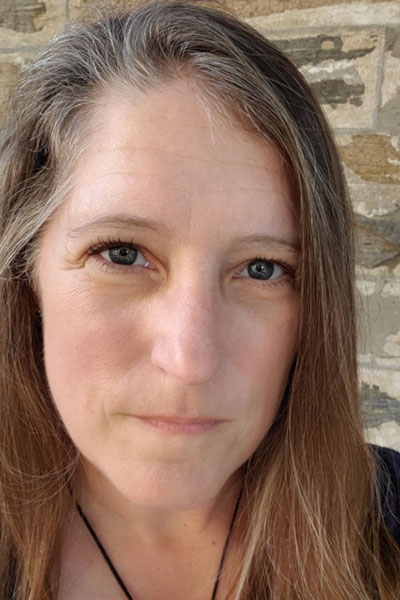 Dawn Huddlestone is a freelance writer/editor, and cyanotype artist. When she isn’t writing or making art, she can be found exploring the trails and waterways of Muskoka.