This room is as airless as all the others upstairs. The window is missing its screen but I yank it open anyway. There are no houses or strip malls outside, only trees and the absence of traffic noise. At least the evening air dilutes the smell. Earthy, almost fetid, reminding me of the white, pudding-like feces of my brother’s boa constrictor, his high school pet. I can hear Gabe moving around downstairs; he’s whistling and it reassures me, knowing he’s there.

Every time I push open a door or pull open a new drawer, I expect the old man to rebuke me, to jump out of nowhere and demand to know what the fuck I’m doing. I have even more of a sense of him now, from the stubble on the bathroom sink to the bathrobe hanging from the door, smelling of Vetiver and stale sweat. Each room reveals him more and his anger grows commensurate with my knowledge. I can almost hear his voice, slightly accented like he was from Eastern Europe, like my own grandfather. Get the hell out of my house.

I admire Gabe’s confidence. To him this is just a job and he goes through the house as nonchalantly as if it were his own. Not that what we’re doing is wrong. Medical Services has already removed the rented hospital bed from the living room, brought in when the old man could no longer manage the stairs. The oxygen tank and the trays from Meals on Wheels have likewise gone. Only the depressions in the carpet from the bed remain. Gabe said it was the old man’s fault anyway. If he had been more natural in life, kept up with his family, then they would be here conducting the inventory instead of us.

A long wooden worktable stands against one wall, empty except for a microscope under a cracked plastic case shoved into one corner and a couple of plants in soil as dry as cereal near the window. A few withered leaves still cling to its stalks. Lining the opposite wall is a series of glass-fronted cabinets filled with trays and jars. When I open the door, there is a smell like nail polish. The old man was some kind of scientist or maybe a biology teacher. All these specimens, pickled in formaldehyde, watching me.

I peer into the trays. Heavy wooden trays with glass lids and inside, row upon row, moths. I could understand butterflies, beautiful things, with wings bright as gems. Each tray is the same though, twelve of them in total, precisely pinned and labelled. White-lined sphinx. Ipsilon dart. American copper underwing. They are the colours of white lichen on bark, of grey twigs, dead leaves. They suit my mood more than butterflies would. They suit my idea of the old man too.

Gabe is in the kitchen now. I can hear the clattering of silverware as he dumps out the cutlery drawer for sorting and counting. Gabe. If I close my eyes, I can feel his thumb on the back of my neck, firm and slow, massaging up and down, helping me relax like he did while we waited for the nurse to call my name. He has a tattoo on his left calf of a monarch butterfly, a souvenir from his favourite class in university: Death and the Afterlife. It was something to do with the Day of the Dead in Mexico coinciding with the migration of monarchs, of the spirits of the dead being contained in the butterflies. He regrets it now, but I’m glad he has it. I wish I had that kind of courage—to put something permanent on my body, to show who I am.

“You going to be okay?” he asked in the car outside the house.

“You probably shouldn’t lift anything heavy.”

The moths look so delicate and soft. I unpin the largest one, on the grounds that it must be the least fragile. Possibly it’s worth something. Half these species are probably extinct. It is soft, furred along its legs and antenna. Its wings, on the other hand, are made up of tiny scales, like a baby dragon. My hands must be trembling, at least a little, for the wings to move like that, to give the illusion of life. I drop the moth back into the tray and wipe the powdery residue on my jeans.

People say now how different things used to be, how a short drive in the country would result in a windshield splattered with insects. How, even in backyards in the city, the summer air could be thick with their droning. Gabe would argue that there are artificial pollinators now. The world may be changed, but it isn’t ending. It’s something to talk about with him later, in the car on the way home, to break the silence.

We both agreed that now is not the time to have kids. Maybe in five years. Maybe never. The world is too unsettled, for one thing. And how could we afford it? There is a part of me that hates the old man. For this big, empty house with its empty bedrooms, for the times he lived in. Winters cold and decently swathed in snow. Languid summers with no evacuation notices due to air quality. He had all this and didn’t even share it. Didn’t protect it.

Outside, the wind’s picking up. The leaves on the trees billow and hiss like they’re borne on a great tide. The plants on the table tremble a little as the cool air rushes in. I pick up my clipboard. I need to be methodical.

There, the lightest of scratches on my arm. A feeling of being pinched by a twig. The tiniest flash of movement. The creature flies off at my shudder. I keep brushing at my arm, hard, at where the pinch raised hairs, as if I could brush away the feeling from my skin, but it’s spreading across my whole arm. The thing’s flown up to the overhead light. The bulb is too bright for me to see it clearly, but its shadow is large enough, beating and fluttering against the ceiling. I can even hear a soft clicking as it beats an erratic tattoo against the glass fixture.

The rustling of the trees increases, as if a storm is heading our way. But there is something else, some undercurrent of sound coming from inside the room. A humming, a murmur. The lid on the first tray is askew. I go to straighten it, to let it close fully, but there’s a space in the rows. Was there a gap earlier, a missing moth? I can’t remember.

The plants under the window are shaking now, and the withered leaves are not leaves, they are pods, cocoons. The tickle spreads, spreading across my whole body. Tiny legs crawling over every inch of me.

The sound is louder now too—the humming, the rushing, the beating of wings.

The long row of cabinets, with its insect trays and reptile jars, stands between me and the door. It’s vibrating now. I’ll have to pass it. I’ll have to see them moving, crawling about, getting ready to fly out.

Back in the clinic, before the procedure with the awful doctor who wore a lab coat thrown over a flannel check shirt, I imagined what it would feel like if this bean, this conglomeration of cells which somehow produced a heartbeat before it developed a heart, kept growing inside me. As it flipped and bubbled and turned, would it feel like butterflies? 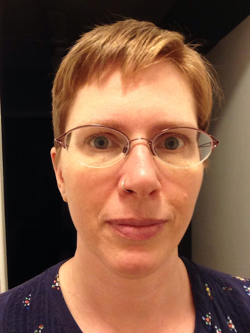 Jennifer Falkner is a short story writer from Ottawa, Canada. Her work has appeared in numerous publications, in Canada and internationally, and most recently in Dodging the Rain, Stonecoast Review, and Historia Magazine. In 2018 she won first and second place in the HWA/Dorothy Dunnett Short Story Competition for historical fiction.