I sat between Mrs. Yablunsky and Mr. Marchand at my Aunt Louise’s house over Passover before the rift between Aunt Louise and Aunt Myrna. Ben and Myrna and their kids and Myrna’s mother Mrs. Yablunsky stopped coming or being invited for the high holidays; though Mr. Marchand still came, and I still sat next to him as he was an uncle or something from Louise’s daughter-in-law’s side of the family. Before the rift—which I think was about somebody not getting a proper greeting on a night out at Moishes, or it might have been something about Louise not sending her regards to Myrna’s granddaughter after the girl broke her collarbone—the dinners were large. Fifteen people or more sitting around a long table with several panels and no room to get out once you were in without shuffling and having everyone pull in their chairs and suck in their bellies.

Mrs. Yablunsky sat with tissue paper arms limp at her side as Louise piled on the brisket and handed it to me to hand down the line. Louise called on me to eat and take more and I did and passed it down to Mr. Marchand who nodded his head and met my eyes with his, clear and quivering blue. “Merci,” he said, and I felt the plate drop a little when he took it. Louise loaded Mrs. Yablunsky’s plate with meatballs, and she sat impressively rigid with an approving but tight-lipped expression. “Which is your favourite?” I asked her.

“Which dish is your favourite?”

“Oh,” she said, trilling air from her thin lips. “I used to like Louise’s meatballs, but I can’t taste them anymore.”

“I can’t taste anything. I think it happened on my eightieth birthday.” She laughed lightly, like she had an inside joke not with me.

“What’s the point?” she interrupted, “I don’t need energy because I only leave the house when Myrna picks me up!”

Mrs. Yablunsky shook her head and waved her hand dismissively towards her daughter.

“The TV, I always have on. Before Nachum was dead, we didn’t have a TV. We played cards.”

She picked up her fork with one hand and the other hung down slack past the seat of the chair. She slowly flattened a meatball. “I can’t remember. I can’t remember a damn thing!” She laughed. I laughed too, and ate and thought about why Louise serves so much meat. Why she serves chicken, meatballs, brisket, and fish. There’s challah and knishes but nothing holding it all together—no rice, no mashed potatoes. It started with matzo balls, though Mrs. Yablunsky didn’t take any. Mr. Marchand and I agreed it was our favourite soup.

Absently waving a fork with her right hand, Mrs. Yablunsky called across the table to Louise’s granddaughter Nicole, “Aren’t you pretty! Aren’t you pretty!” The blond toddler eyed her suspiciously, whispered to her father, and slid off the seat. She pressed herself between the backs of the mahogany chairs and the maple hutch, then danced towards her mother and grabbed a bald Barbie held by her little sister. Her father Barry watched with frozen interest and called to his wife, “Cybil, get the doll from Nicole!” and then to Nicole, “Give it back! Nicole, give it back!” And shovelled heaps of fatty brisket into his maw. Mrs. Yablunsky and I watched, and I willed him to make eye contact. My Uncle Barry—I used to think he was so cool. He travelled the world in olive-green short shorts and hiking boots; he had a wiry beard, laughed good-naturedly over everything, and always took the left side. Four years and fifty pounds into family life, and he sneers out the side of his food-full mouth over anti-austerity. Family dinners during my university years felt different. My Uncle Barry, who I guess is more of a cousin, but I had called uncle as a child; my mother’s brother, Marc; and my cousin Heather’s husband David would talk politics and morality and ethics and the recession and the student strikes. And now Barry slurps his meat, Marc died of cancer, David’s at the far end of the table—probably the same as ever—and I’m more comfortable amongst the silence and slowness of Mrs. Yablunsky and Mr. Marchand who eats tidily, wore a beautiful blue suit, and combed his hair so neatly I could see bits of soft pink scalp between the combed partitions. “​Chère​, I like best the brisket too,” he whispered to me as Louise cleared the plates and Mrs. Yablunsky’s mounds of half-mashed meat jiggled and slid. “Yes.” I told him and we smiled and he patted my hand and I could have wept but for the Zoloft.

But Barry didn’t look up, and Mrs. Yablunsky loudly sipped some water.

“I don’t think he tastes it either,” I whispered to Mrs. Yablunsky, with a side eye on Barry looking into his plate.

“​Hein​?” she shouted, crunched up her face, and looked at me like we’d just met. 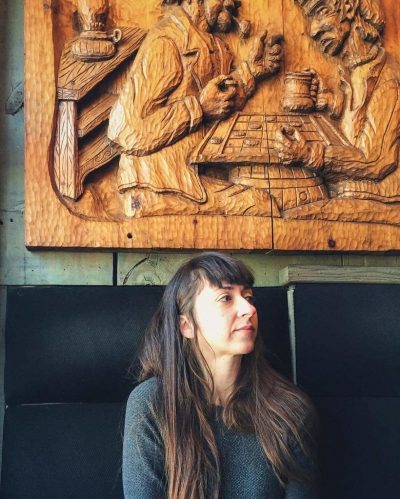 S. Mintz is a recent graduate of the English M.A program at the University of Regina. Her creative writing thesis was concerned with Jewish identity and tradition mediated through popular culture. Her work has thus far been published in the University of Regina’s [space] journal, the Book*hug Anthology, Write Across Canada, and is forthcoming with JackPine Press