The fluorescent lights in Dr. Katherine Southey’s examination room illuminated difficult truths. Their glare lit the sallow skin of the bottle-a-day wine bibber who purported to enjoy a glass or two on social occasions, the amber stained fingernails of the only-with-morning-coffee smoker, the bruises of a child who’d “fallen” onto a fist. Secrets tumbled into the antiseptic-infused air of the windowless room as matters of routine. A few years ago, Gordon Bigelow would’ve been fascinated by the interrogation cell dynamic of this therapeutic space from a philosophical and psycho-social standpoint, but now he didn’t care. He was too knackered to care. He had a secret obsession, ripe for revelation, of his own.

“What’s your opinion on euthanasia?” Gordon’s voice was a tremulous rasp, but his eyes focused with steadfast purpose on the inscrutable face of the lab-coated woman sitting opposite him.

Gordon realized she was assessing him without so much as lifting a reflex hammer. Through rimless glasses, she saw a shrivelled-up, retired philosophy professor, likely losing his marbles, and reliant on a rollator to maintain his balance. He imagined her speaking into a Dictaphone at the end of morning clinic: Bigelow, Gordon, eighty-five-year-old male, cachectic, signs of dehydration, possible anorexia secondary to depression.

“I think it’s an ethically sound, compassionate option for patients who are suffering at end of life,” she said.

“So, you’d support a patient who decided to seek euthanasia?”

“Then, not without reservation,” Gordon challenged.

“There are legal guidelines to determine who qualifies for it.” Katherine swivelled to her desktop computer, tapped in a query, then read aloud: “the patient must be capable of making healthcare decisions . . . have a grievous and irremediable medical condition . . . natural death must be reasonably foreseeable.”

“Okay,” said Gordon. “I believe I tick those boxes. Capable? Check. Grievous medical condition? Well, take a gander. I’m twisted up with arthritis like a dry dishrag. I have congestive heart failure. I leak embarrassing bodily fluids irremediably, therefore check. And every day I foresee my death which is both natural and reasonable at my age. Again, check.”

Katherine leaned back and crossed her legs. “Let’s set aside the question of whether you’re eligible for assisted death for a moment, Gordon. I want to hear why you would consider pursuing it in the first place.”

Katherine’s reflection of his words followed by her silence annoyed Gordon yet provoked elaboration. “And I’m in a state of advanced, terminal, stage four, metastatic decrepitude. You can diagnose me at a glance.”

Gordon saw she wouldn’t be corralled into any promises; but he’d make his case, as he’d rehearsed. “Apologies to the great poets, Katherine, but I’m ready to go gentle into that good night. My life is no longer wild or precious.”

“But you’re still active in the community,” said Katherine. “Didn’t I see you at the Elmington Historical Society luncheon?”

“Yes, you did, but my eyes are too weak to edit the newsletter now. My life’s work is behind me. Regression to pablum and diapering and being pushed about like an adult-sized doll in a stroller lie ahead. To channel Monty Hall, which would you choose, Katherine? Behind door number one is a booby prize—a goat, if you will. We open door number one to reveal the former physician and triathlete Dr. Southey—deaf, blind, demented, chair-bound, and incontinent in her dotage. And then there’s door number two—a black door marked with a skeletal, robed figure holding a scythe. Perhaps there’s a prize behind door number two. Perhaps oblivion. No one in the audience knows . . . not even Monty Hall knows. Wouldn’t you gamble on door number two?”

“Okay. You’ve laid out your logic, Gordon. But usually there’s a third door in Let’s Make a Deal, isn’t there? The choice needn’t be binary,” said Katherine.

“And I’m suggesting wait and see. How’s your mood?”

“I’m not depressed, and I’m insulted that you’d jump to that line of questioning. My request is rational and life-affirming. Why ruin a wonderful, eighty-five-year trip with a sojourn in a fleabag motel at the end? I want off the bus now.”

“No, not at all. My room has a view, the food’s adequate, and the people are friendly. I speak metaphorically. It’s my senescence that’s flea ridden. This is why society needs the humanities. So we can communicate beyond ham-fisted assessment tools and questionnaires.”

“Alright. For now, I accept your claim that you’re not depressed. Have you discussed your feelings with your son?”

“No. He’s in Dubai for a few months, and I don’t want to pester. When I’ve made the arrangements, I’ll contact him.”

Katherine waved her hand to find a suitable word. “Exploration.”

“Perhaps he would. But it’s not his mortality we’re exploring, so his opinion isn’t relevant,” answered Gordon.

“Fair enough. But what is relevant is that we proceed with care. Gordon, I’ll be honest. I don’t think you even qualify for an assisted death.”

Gordon looked down at his gnarled hands. Tears, unbidden and unwelcome, pooled in his eyes. His predicament was obvious to both of them, but Katherine wouldn’t acknowledge it. Gordon couldn’t reliably control his bowels or bladder, yet he’d naively thought the Supreme Court of Canada had granted him the power to decide when he’d die. He realized he was wrong. Katherine held the levers of life and death and, evidently, she was too squeamish to pull the handles.

Katherine passed Gordon a Kleenex. He mashed the tissue against his eyes and nose, cleared his throat, and prepared to hear her rationalizations—her unexamined excuses for why she’d deny him what he believed to be his ultimate right.

“Gordon, no practitioner would judge the timing of your death as reasonably foreseeable.

You’re eighty-five, and you could live another decade,” said Katherine.

“Not without modern healthcare,” countered Gordon. “My current existence is unnatural. I rely on medication and the everyday heroism of the retirement home staff.”

“And you’re not suffering. You told me the hydromorphone was effective for your hip pain, and you have no other discomfort.”

“Ah, Katherine. I’m disappointed but not surprised that you have the blinkered perspective of the empiricist. My suffering is not physical. It’s existential. I have a deep, psychic pain for which there is no remedy but death.”

Katherine tented her fingers and frowned. Gordon’s plea hung in limbo between them. Finally, she said, “I acknowledge that you’re suffering, Gordon. There may be a route to your stated wish. However, as your doctor, I’m duty-bound to address any mental health issues before we even consider this request. I’d like to start you on a mild antidepressant.” She turned back to the computer.

Katherine was smothering his singular wish in a sympathetic blanket of words. Given a minute, she’d extinguish his hope with pharmaceuticals. He wouldn’t submit. “All I have left is my brain, and I won’t take anything that will diminish my capacity to think,” said Gordon.

Gordon raised his hand. “Save your counsel, Katherine. They all have side effects.”

“Then, at a minimum, I’ll refer you to Dr. Nam. He’s a psychologist who specializes in geriatric cases.”

“As a geriatric case, I consent to the referral with the caveat that we revisit my request—soon,” said Gordon, hoping to bridge the impasse.

“Okay, Gordon. That’s reasonable. We’ll discuss your request again in six months if you still feel as you do today.” Katherine picked up her stethoscope and stood to conclude the appointment. “Anything else?”

Gordon gazed blankly at a poster on contraceptive options. He couldn’t face the unctuous, clinically practised concern in Katherine’s eyes. Half a year was too long to wait, but negotiations were over.

“I look forward to receiving news of my appointment with the esteemed Dr. Nam. Thank you, Katherine,” said Gordon. He bestowed a vague, tight-lipped smile on the poster to release Katherine from further pointless conversation.

“You’ll hear from us by the end of the week,” she said as she left the room.

Gordon stared at the closed door, bewildered by Katherine’s stonewalling and brisk retreat, suddenly overwhelmed by fatigue. He was wheezing now. He’d have to marshal his energy before facing the taxi ride back to Primrose Terrace. He wouldn’t ruminate on what he might have said, on what untried strategy might’ve changed the outcome. He was too old to expend time on futile hypothesizing, on replaying mental tapes of wasted words.

Gordon’s thoughts turned to Plan B, to the ace he concealed in the sleeve of his beige cardigan, hidden from the fluorescent light in Katherine’s examination room. Since he moved into Primrose Terrace, Gordon didn’t have access to his medications. He didn’t have a driver’s licence anymore, let alone a vehicle to crash. He was too frail to climb up on a chair to hang himself, and a care worker supervised his twice weekly baths, so drowning was impossible.

Katherine had cornered him and now, like a fox in a leg-hold trap, he had to resort to extreme measures to free himself. He’d have to stop eating and drinking. Like all worthwhile endeavours, Plan B demanded self-discipline and forbearance, but there were worse things in life than hunger and thirst. 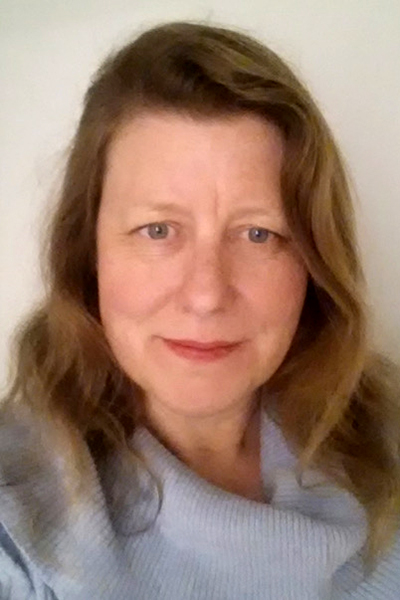 Renee Lehnen works as a registered nurse in a long-term care home in Stratford, Ontario. Writing is her favourite stress reliever, but she also enjoys outdoor sports, painting, and torturing an old piano.

A latecomer to the world of writing, she took up the craft as an empty nester and what she lacks in experience, she makes up in enthusiasm.