I can’t imagine how people can go on television and tell their stories to the whole blessed world. Like on Oprah, although she does seem like a nice person.

Today I watched a show called Abusive Husbands in the Military and The Wives Who Love Them. Couldn’t have been hard to find a couple of those. When it ended, I did something I should have done long ago: I took down the photo of Richard and me on our wedding day, and stuffed it into the piano bench under the Sears catalogue.

We did look rather grand, him in his Navy whites and me in my white satin. Barbara borrowed that dress for a high school play, and I told her not to bring it back, to just give it to the Drama Club. Truth is I wanted it gone before she might think of wearing it for her own wedding. As it turned out, she didn’t want a real wedding dress anyway. She made a kind of caftan from a pink Indian bedspread. I thought Richard was going to faint when he saw it. And Jonathan, her husband—that is, her ex-husband—was in sandals, and a gold brocade jacket, and baggy white slacks no better than pajamas. He looked like that Indian politician I used to see on the newsreel at the movies after the War.

Richard and I had a proper wedding, for what it was worth. Nothing but the best. Daddy was a great friend of the Bishop, so of course it had to be the Basilica for his little girl. All those extra blessings certainly didn’t do us much good. Then off to the Château for champagne and chicken à la king for over a hundred and fifty people. Must have cost Daddy a pretty penny.

“The charming young bride, given in marriage by her father, wore a full-length gown of satin and French lace designed by Yves de Montréal. Her fingertip veil fell from a pearl tiara, and she carried a bouquet of white and peach roses. For her going-away outfit . . .”

Why on earth would I still remember that write-up? Maybe because it was page one of my Fairy Tale Gone Wrong.

After the reception, the happy couple raced out through the confetti storm and jumped into Richard’s friend’s car which we’d borrowed for the week. He got into the driver’s seat, waving at everyone—Lord of All He Surveyed—but as soon as he got us around the corner, he pulled over and made me drive. It turned out his license had been suspended, but he didn’t want anyone to know. And so I drove, obedient from the start.

We reached the resort in Gatineau in time for drinks before dinner. We had wine with our meal, and Richard had a few more drinks on the deck as we watched the sun set over the lake. When we got back to our room, he told me to “get ready.” I had no idea what that meant, so I went into the bathroom to get undressed. I was probably in there for ten minutes, as I couldn’t manage to get into my nightgown. I’d had it made from the same pattern as my wedding dress, so it too had a million buttons down the front—impossible-to-undo buttons. Finally I got enough of them open to pull it over my head. When I checked the mirror to see if I looked okay, I saw that my whole chest was covered in coloured confetti. I went out to show Richard how funny it looked, but before I could, he’d grabbed me by the shoulders and shoved himself against me, tearing at my nightgown so the buttons popped off and flew about the room. I managed to push him away, but then he hit me with the back of his hand so that I fell sideways, knocking over the bedside table and his drink. I remember the smell of the Scotch as it dripped on my head. That’s not all he did.

Bruises came up on the side of my face and all down my arm. At least they were fading by the time we got home. I told my parents I’d fallen in the tub, and my mother made a point of saying she believed me. Daddy didn’t say a word.

No one makes TV shows called Men Who Drink and Beat Their Wives. That’s not news.

I never told anyone about Richard. I didn’t dare tell my parents, and my only brother was living out in Calgary then; he’d have said either I shouldn’t have married Richard, or I should leave him. No grey areas for him. No one ever mentioned his drinking to me. Of course the kids know their father drank too much, but now that he’s dead, they seem to be making him into a Latter-day Saint. Good old Dad. So much fun!

As the years went by, the kids arrived, and I just tried to carry on looking after them, keeping them safe. Then in 1969, I think it was, I was at my doctor’s for a checkup. I was sitting there in one of those ridiculous gowns that barely cover a person, so my doctor couldn’t help but notice the bruises on my neck and legs. I told him I’d fallen. Tripped on the stairs. He looked at me so long and hard that tears came to my eyes.

So it began, my life with Valium. It did make me less nervous, less edgy. I still knew that I should be on alert, but I’d lost the ability to plan ahead. It was as if I’d forgotten how to worry. As time went on, I forgot other things: appointments, where my keys were, even how to make anything but the simplest dinners. I’d become an idiot, and being an idiot, I didn’t understand that I’d become an idiot because of the pills. Richard seemed to be forever angry; every second sentence began with “For Christ’s sake, Vivian!” And when he’d start hitting me, I couldn’t muster the will or the strength or the focus to fight back.

I continued to take Valium until our last kids, the twins, were about to leave for university. Richard decided we should take them on one last camping trip, and in the packing process, I forgot my pills. I forgot my pills precisely because I was taking those pills. After three or four days without them, I realized I’d managed to make us a whole dinner over the campfire, and I hadn’t messed it up or forgotten anything. At the same time as my head started to clear, I also began to feel very strange, as if I’d become two people: the one cooking our breakfast and the one watching someone who looked just like me cooking our breakfast. I suffered terrible headaches, especially in the bright sunlight, so on our last night, Richard told me to rest in the tent while he took the girls for hamburgers and a movie, impressing on them how well he was treating me in my distress. When they came back, they told me the plot of the movie, and I remember being astounded that I could actually follow what they were saying.

I never took another pill. This made me much smarter again, but of course this had its dark side too. As the feeling of bungling along under water receded, I became more aware of the danger I was in, and my natural impulse to fight back returned. This enraged Richard. He kept saying, “I thought you’d learned your lesson.”

I don’t know what I’ll tell Barbara when she notices the empty spot on the wall where our picture was. She goes on about the subjugation of women, but she won’t like finding out she has a mother who couldn’t stand up for herself. She doesn’t understand what it was like then, that if I had left their father I would have had no money whatsoever, and then Richard would have gotten custody because of my “inability to provide.” And he’d have kept them from me; that I know.

I’m never going to tell the kids this next part. They know their father drank, but they don’t know they had an unfit mother too. I’ll never tell them that many a time when I didn’t know how I was going to face another day—and another night—I used to pray that Richard would hurt one of them—just a tiny hurt they wouldn’t remember, but big enough to leave a mark that would give me grounds to take them and leave. People wouldn’t point a finger if the children were the ones in danger. It was the only escape I could think of. So you see why I can’t tell them that. I don’t want them to know they have a wicked mother, ready to sacrifice her children for a ticket out. 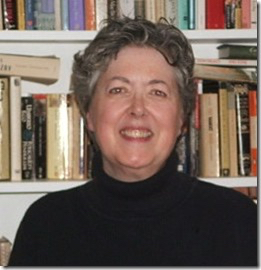 Mary J. Breen is the author of two books about women’s health. Her fiction and nonfiction have appeared in national newspapers, essay collections, travel magazines, health journals, and literary magazines including Brick, The Christian Science Monitor, Ars Medica, Boston Literary Magazine, and The New Quarterly. She was a regular contributor to The Toast. She lives in Peterborough Ontario Canada where, among other things, she teaches writing.