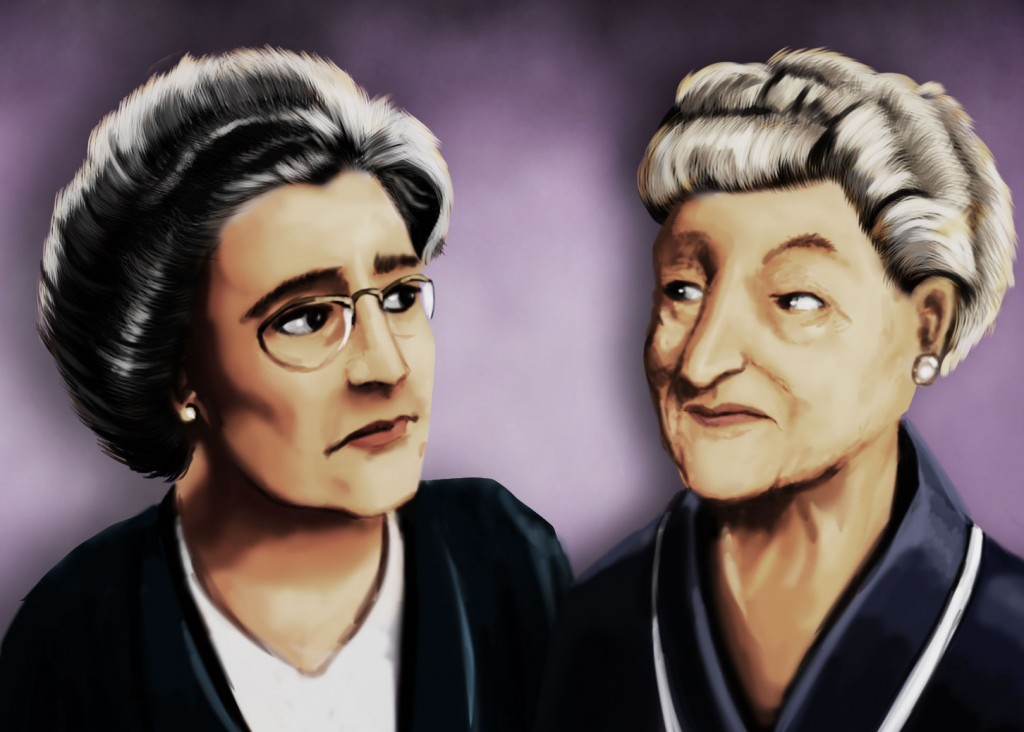 Thank you for considering Agnes and True as a destination for your work.

Debbie stepped into the elevator and saw the new resident, Max, leaning down and whispering in my ear. She grabbed him by the shoulder and pushed until he stumbled out into the hallway.

“Sharon doesn’t want you hanging around her!” she shouted in her warbling girlish voice.

“What in the hell are you doing?” I said as the doors crept closed. The elevators moved as slowly as the residents in Denver Golden Acres.

Nobody here is in a hurry for anything, so that’s just fine.

“I think they call it taking out the trash.” Debbie said. “Max gives me the creeps.”

Some people make fun of Debbie’s voice. They say she sounds like that television chef— Julia Child? I always liked her voice. It was the biggest part of her and sounded young and strong.

Sharon Tavares glimpsed her reflection in the liquor store window. Not bad for fifty something. Her stretchy jeans and red leatherette jacket blossomed with stylish zing and the knock-off Sketchers, fifteen bucks on sale at Walmart, were comfortable. She smiled at her fortunately proportioned face—well-boned nose, exceptional puppy-dog brown eyes, and a mouth that piqued fantasy in at least one man a day—and figured today was going to be okay.

The air smelled raw with an […]

Amy’s second reaction was to step to the left so that she couldn’t be seen through the kitchen window. Her third reaction was to swipe and tap on her phone until she heard it dialing Julie. The ringing stopped.

“You know it’s five-thirty in the morning, right?”

“There’s a man in my treehouse,” Amy whispered.

Julie’s laugh fluttered down the line. “Well, I haven’t heard that one before, but good for you!”

“Twelve in the corner.” Lucy gestures with her cue.

She takes a wide berth around the pool table to claim territory. Henry steps back. Lucy bends and stretches to reach the cue ball. Even now, she still feels self-conscious standing on tip toes, ass in the air, midriff hanging slack like a bag of sand, the neck of her blouse opening to reveal her empty bra.

The Grittiness of Mango Chiffon

Oh, those squinty little eyes. I’ll never forget the look of them. Like the night she found tobacco crumbs in my baseball jacket pocket. She spread the brown flakes out on a white napkin under our dining room table’s one-hundred-watt bulb.

“Arnold, I thought you told me you did not smoke?” she said. Her voice was calm, level as wet cement. The clock ticked on the mantle, sounding just as nervous as I was.

Rosemary stood on the bluff gazing out over Lake Erie. It was eight in the morning on a day in late March; though technically a spring day, with temperatures hovering at six below, it didn’t feel that way. She tugged her toque down around her ears and wrapped her scarf more tightly around her neck. At least there was no wind. For the moment the lake stretched out before and below her, ice coloured and […]

“And you don’t know the half of it!” Derek shouted, efficiently ending our two-year relationship. Did he literally mean the three betrayals I knew about could be doubled, or even tripled? If that was the case, I didn’t want to know; and I wasn’t going to stick around to find out.

I signed up for three online dating sites the minute Derek carried his last glass dome of exotic-bird taxidermy out of my apartment. Screw watching […]

Gerri was about to bring the meeting to a close when the woman at the end of the room said, “I don’t think I can stand any more of this.”

The group sat on a ring of chairs around two long plywood tables that had been shoved together endways. The woman had fanned photographs of her daughter across one of the tables; she touched them with her fingertips, making tiny adjustments in their positions. […]

It’s her I think of as I shovel horse shit.

My twin sister was big into horses. She wasn’t a horse girl like other horse girls—she didn’t ride. Parents couldn’t afford it. But she read those Heartland paperbacks until the books fell apart and measured everything in hands instead of feet.

When we were eleven, Dad found a pair of leather chaps for her at the thrift store up the road. They were worn down real […]

I sat between Mrs. Yablunsky and Mr. Marchand at my Aunt Louise’s house over Passover before the rift between Aunt Louise and Aunt Myrna. Ben and Myrna and their kids and Myrna’s mother Mrs. Yablunsky stopped coming or being invited for the high holidays; though Mr. Marchand still came, and I still sat next to him as he was an uncle or something from Louise’s daughter-in-law’s side of the family. Before the rift—which I […]

Black words on a white screen, black fissures in the ice, widening and cracking. I should have known, and now I know. I close the browser, then open it again, creeping back to the message like a skittish animal enticed by the possibility but afraid of the trap.

I set the trap myself. I took the test. I should have known she could be there waiting for me, but what were the chances? I had […]

Miki is pouring rice from a bag into a measuring cup when the phone rings. Its electronic warble startles her. She slips, and translucent pellets of uncooked grain spill across the countertop. Never waste, her grandmother used to say. Okome is precious. She snatches a take-out menu from the shelf above the sink and uses it as a broom, sweeping the rice into a bowl—a task made troublesome by its near-invisibility against the smooth white surface of […]

I locked myself in the powder room again, just couldn’t help it. Flipped the toilet seat down, and sat there. I squirted cream into my hands and rubbed them together, staring up at the ceiling, like always. The crown molding is so bright against the deep scarlet of the walls. I did all the painting myself. Chose the paint too, and still remember that day at the hardware store. That silly clerk with her clenched jaw. She had to mix […]

On an October afternoon—air clear as a bell, yellow leaves twirling down—I sipped coffee on my deck, soaked in the sun’s weak autumn rays. And got the news via Facebook.

Your sister Alma and I haven’t seen each other in almost forty years, though we “like” and “share” each other’s posts. “We are heartbroken to say,” she wrote, “that our dear brother Rob passed on Tuesday.”

Jesus. What? I took a breath before I read more, pulse pounding in […]

I ring Pulaski’s doorbell, and after a time he appears.

“There are complaints about your cars.” I tack on an apologetic tone. I’m not enjoying telling him there have been ugly comments. Three Buick Roadmasters have been sitting in his driveway, leaking oil, for the better part of five years. “Could you move them?”