In that country, they don’t bury the dead. They pile the bodies on a criss-cross platform of logs and sticks out in the forest, so the flies can eat. The life drips off the bones until what remains is pure, pristine, perfect. Bleached ribcages scoured by the wind, seashell skulls washed by the rain.

Every seven years the People wrap the bones in fresh linen and parade them through the village. In this way the dead can watch the ongoing trials of the living from afar, and know the comfort and consolation of distance.

In the beginning, I shared that perspective.

I lived with the People of the Thorns. They carried iron blades shaped like leaves. Their malarial yellow eyes glowed in the darkness of their huts. At first I thought it was me that they watched, but it was my shoes. My shirt, my pants, the notebooks and pens I carried.

When I said salama, hello, one response was “Don’t speak. You don’t belong here.”

When I left my flip-flops outside my hut to dry, they were stolen.

When I bought a toothbrush for that girl with the mouthful of rotting crockery, she sold it.

I was alone until the Highland People extended their patrols to my new village. They were as dark and deadly as the Kalashnikovs strapped across their backs. I’d find them hammering down Three-Horses at the Chez Merde. Iron grenades dangled from their belts: I let them win at Fanorona. But I played the game. I moved the pieces. They accepted me.

They taught me Gash. I learned that kibo means belly, so a kibokibo is a joke. Velona is to live, to be alive. Mamy fo velona (sweet heart living) means to be centred only on one’s self; to care only for one’s own life. Ahy means me. It also means mine. As a verb, it means to be a cause for worry.

I met a holy man who wore a baseball cap and Soviet-era khakis. His magic was not about healing or love, but about tromba, spirit possession. Tromba is a gift, he said, not a curse. It’s a call by the ancestors to do what’s right. But sometimes it goes wrong.

The village church sometimes performed exorcisms for bad tromba, but it was mainly a place for singing. Every Sunday morning they chanted heaven down to earth. Heaven isn’t far from that country.

Neither is hell. One morning I woke in a cold sweat that blossomed into a hot fever by nightfall. I couldn’t move. I cried for help. The holy man came and forced bitter tea down my throat, and I vomited until I couldn’t think anymore. Tsara, he said. Good.

When the rainy season came, blue mold bloomed on my leather boots. The road to the capital washed out and the food trucks stopped coming. The last loaf of fresh-baked bread I bought was the best I ever had. But there were eyes and hands all around me. I couldn’t refuse them.

I was hungry, for the first time in my life.

There was only tea. I learned to turn my cup upside down when the tea was gone, then right side up again. My future was there in the Rorschach grains. A butterfly for passion. A moon for tromba. A comet for bad luck.

All of that came true.

One day I saw an axe: hardships that end. A mushroom: a sudden departure. A kite: a long journey.

I was going home. Back to mamy fo velona.

Two years after I came, I left that country with no bags to check. I gave away everything I had. And everything I wished I had. 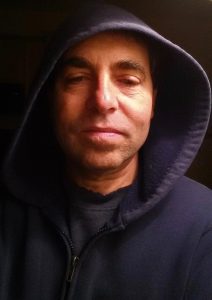 Fred Senese is a former NASA scientist who teaches chemistry at a small university in rural Appalachia. He is the author of three books and an award-winning science website that has been recognized by Scientific American, The San Francisco Chronicle, and others. His stories have appeared or are forthcoming in Spark: A Creative Anthology, Murder & Mayhem (Flame Tree Anthology Series), Bartleby Snopes, Triptych Tales, Firewords Quarterly, Zetetic Record, The Molotov Cocktail, KZine, and others. He is currently working on two books on symbolic mathematics and dozens of strange short stories. Find him at fredsenese.com, @fsenese on Twitter, and at facebook.com/fredsenesewrites.