And here I sit on a chilly, pine needle morning—the trees cut black against the watery
tangerine sky. Poetic​ ​.

I’m mentally going over my speech. No, my proposal. A statement of deeply felt resolution.

“Don’t be mad, but . . . listen. How are you feeling about this?” (Gesture between us.) “Remember when we fought about which seedy bread to buy for sandwiches in Tofino? What a stupid life, right?” (I’ll laugh here because it’s stupid in a funny way, but I won’t laugh so hard as to imply the memory is a fond one.) “You know how we’ll all die soon, in the blink of an eye. How right now, we are—if we’re lucky—halfway through this life, and the second half isn’t as good. Here’s the thing. I’ve always wanted to take up fencing.”

“Is it just me or have we become strangers?”

And we are strangers. We married young, grew up after. I’ll say that. We were two saplings planted together, neither in its rightful habitat. One needed heavy clay soil to hold its wide roots, the other needed long hours of sun. I shouldn’t have to say it—the wide-roots tree is me, and the sun-loving tree is him. He grows tall, blocking my light; my roots grow wide, strangling his own.

It’s not a perfect analogy. Too much room for misinterpretation and overanalysis. I’m not even sure that’s true about trees.

Besides, he’ll move on. I know he flirts and women flirt back. He’s balding but works out. You understand. Maybe I’ll move on as well. I don’t work out; but my jawline is outstanding, and I’m a snappy conversationalist.

I’ve always wanted to write a novel, grow lemons in the sunroom, adopt a bull mastiff. Take up fencing. What has he always wanted? I imagine him buying a mountain bike. Eating out a lot more. Laughing to tears at reruns of The Big Bang Theory.

He’s up now. I can hear him in the kitchen. His routine is like a song I can’t get out of my head—pour the coffee, scratch the cat behind the ears, grab a banana, sit in the living room with his laptop open to TSN before he showers. I stretch and catch a glimpse of the low sun—all tangerine is washed from the sky now. Our neighbour Patti is outside in short-shorts, groaning about the goddamn-mother-fucking sprinkler system. Less poetic, or a different kind anyway. I can’t always tell.

I go inside. He looks at me before his eyes are pulled to his laptop screen, then forced back to me out of politeness. His lips don’t part when he smiles. My own returned smile must look the same to him—friendly colleague​. 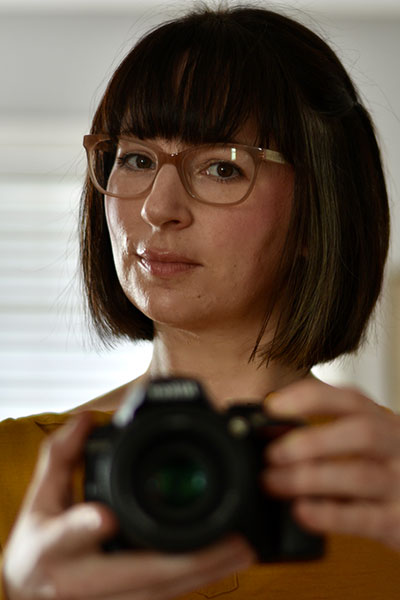 Angie Ellis lives on Vancouver Island. She has had work published in Narrative, The Cincinnati Review, Grain, The Forge Literary Magazine, and forthcoming in The Fiddlehead. Two of her stories have been longlisted in the CBC Short Story Prize and she is very grateful to have been awarded grants from BC Arts Council and Canada Council for the Arts.