“Ma, come on, let’s go . . . we’re bored,” her son said. He waved at the colourful mural covering the brick wall behind him. “We’ve seen enough of these damn Group of Seven paintings to last a lifetime.” Her daughter-in-law nodded while her granddaughter’s fist pounded up and down the keyboard.

Marla ignored their complaints and glanced back at Thomson—her favourite artist—captured for all time, in a bronze sculpture.

She wondered if she was losing her mind.

Thomson sat on a sunny stump, oblivious to the tourists. His dark hair fell over his forehead, and he clenched a pipe in his mouth. His eyes met hers and held them. Marla put her arm around his shoulder, leaned against him and took a selfie.

The sky darkened, and a storm rumbled in the distance.

“Ma, we’re leaving,” her son said. “A thunderstorm’s coming. We’ll drop you off at the cabin and head back to Toronto.”

Marla perched on the edge of the red Muskoka chair on her dock and raised a glass of merlot to the setting sun. The summer storm had blown over and she was alone. Somewhere out on the lake, a loon called. She lifted her binoculars and scanned the water. There it was, like magic—the female a few yards away. The loon dipped her head, searching for fish. Then she ducked under the water and disappeared.

It’s amazing how far they can swim like that underwater, Marla thought. She marked the spot where the loon vanished, and scanned the lake to catch the moment she surfaced.

A little farther away, the water rippled and a black head popped up. The loon ruffled her wing feathers, then relaxed and drifted in the breeze.

Marla’s family didn’t like the loons. When the birds serenaded at sunset, her family complained.

“That sounds like a bunch of werewolves,” her son said.

“It’s too scary for me,” her granddaughter said. “I wanna go home.”

After they’d left for Toronto, Marla researched the Internet. She was positive the loons were communicating to each other.

She heard a laughing waver, and the big male bird appeared in the eastern sky. Marla’s skin prickled. She understood what he was saying.

“I’m coming home, babe.” He splash landed and swam to the female. He circled her, dipping his neck to and fro. The female hooted and preened. They came close together, nudged and circled. They headed for a small island in the middle of the lake. One afternoon, when she was out canoeing, Marla had noticed their nest there, in the reeds among the rocks. The male had made a beeline for the canoe, and his red eyes glared. He circled the canoe. Marla knew he didn’t like her being so close.

Just like the kids. They said she needed to move on. Perhaps they thought she’d become a burden. Perhaps it was time to plan for the future.

On the kitchen table, beside the art gallery pamphlets she’d picked up in Huntsville, her son had placed a brochure. For a retirement home.

“Lots to do there, Ma,” he said. “Maybe you could take up oil painting. You like that Group of Seven stuff so much.”

“If you moved there, you might meet a new guy,” her daughter-in-law said. “Do you ever think about that . . . maybe marry again?”

Marla wondered if her daughter-in-law imagined her with a random Viagra-popping dude. What a joke.

Maybe the kids were worried they’d lose their inheritance if she did.

Would Brady mind? He’d been careful with their finances. Their investments were supposed to last until she was ninety.

“What then?” she’d asked him one night as they lay in bed. “When it runs out?”

“The government will take over,” he’d said. “You’ll be okay.”

“Maybe I’ll have a fling and take a world cruise.”

He laughed, “Go for it. Better that than sitting drooling at a retirement home.”

“That’s a stupid idea,” he said and turned out the light.

“We should plan to go together. Things will be easier that way,” she said.

He hadn’t stuck to her plan.

She raised the binoculars again and watched the star of Venus rising above the trees.

The sounds of coming nightfall were close. A horned owl hooted. A wolf howled. A frog on the shore harrumphed, and in front of her a fish splashed.

As the sun dropped, the sky flooded with violet streaks. Incredible! Marla grabbed her phone and took a photo.

She caught a whiff of sweet pipe tobacco and turned her head. Tom Thomson sat on the dock beside her, paint box open on his lap, sketching the scene on a wooden board. He hummed as his palette knife mixed aquamarine and crimson into a rich purple hue. He took out a wide paintbrush and filled in the trees.

“I’m amazed to see you here,” Marla said. “I thought you were dead.”

He shrugged, lifted his painting, and tilted it towards her.

“Love it.” She tipped her head thoughtfully and crossed her arms. “I’d give anything to have one of your paintings.”

“Want a drink?” He grinned and winked, and held up her half-empty wine bottle.

They finished the bottle. She lit an oil lantern and placed it in a corner. Tom squeezed a blob of white paint onto his palette, took a clean brush and swirled in the clouds.

Marla asked him a question that had bothered her in Huntsville.

“The drowning on Canoe Lake—was it an accident . . . or were you murdered?”  Tom pointed to a boat puttering across the lake. “See that guy? Just caught a fish. Likely a bass.”

“You’re avoiding me. Which one’s the answer?” He shrugged. “What difference does it make. It’s over. Time to move on.”

He whirled a golden blaze of light around the sun. The colours in the sky faded to a deep indigo, and the wind died. A full moon rose above them, like a great white spotlight.

He took her hand and twisted her diamond wedding ring. “How long’s it been?”

“Too long.” She pulled her hand back and bit her lip.

They watched the stars turn on, one by one.

“There’s the Big Dipper and the North Star.”

Marla yawned and rubbed her eyes. He pointed at the moon’s reflection shimmering on the water. “Could you swim out to catch it?”

“I loved to swim when Brady was alive. He didn’t, but he waited for me on the dock. I can swim for hours; I just don’t like to swim alone.”

“You’re not alone.” He set his paint-box and palette down onto her towel. “Go ahead, I’ll keep watch. Take your clothes off, and jump in.”

She looked around the lake. There were no lights anywhere.

“Promise not to look. I’ve never done this before.”

Marla stripped and shivered. The air was chilly. She perched at the edge of the dock and dangled her feet. Then she slipped in. The water came up to her waist; she gasped and splashed it on her arms. Then she splashed Tom. He ducked and laughed.

“Are you watching me?” she said.

“It’s mighty dark, but I can see you all right. Go ahead, swim to the moon.”

Marla felt the water flow over her. It was like silk, skimming over her skin. Her arms beat a steady rhythm of reach and pull, and her legs flutter kicked below the surface.

She glanced back to see if Tom was watching, and saw him wave.

Marla held her breath, ducked under the water and glided. A dark shape was floating beside her when she lifted her head. Marla stopped swimming and tread water. It was small, and it had red eyes.

“The female.” Marla whispered, her mouth slightly above the water. The bird swam closer and cocked her head.

A pearl necklace was coiled around the loon’s neck, and white diamonds were scattered across her black-velvet back. Marla stared at her; she stared back, and moonlight danced on the water around them. Marla relaxed and lay back, effortlessly floating, and gazed into the heavens. Overhead, the star-spangled Milky Way spread out like drifting smoke. A meteorite flashed by, on a burning path to the Elysian Fields.

Was Brady up there?

Across the lake, Marla heard the male’s yodel. Beside her, the loon lifted her head and wailed. She stretched her neck and body until her feet were exposed. Her wings extended, and she ran across the water’s surface, crying, “Wait for me, I’m coming.”

Then the loon was gone.

A sudden wind stirred up the waves, and clouds blocked the moonlight. The water was frigid and Marla felt numb. She couldn’t see the shore and choked on a mouthful of water. Her legs were heavy, as if something was dragging her below. She closed her eyes, and started to sink.

“Come this way,” Tom’s voice called from the dock. “Your painting’s finished.”

She smelt his pipe tobacco, and saw its glow.

Her heart was strong, and she began to swim. 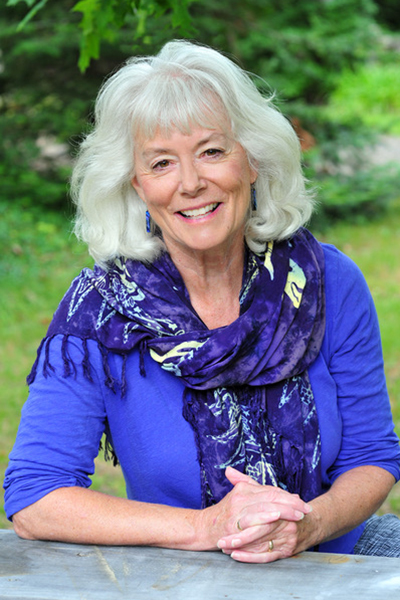 Sharon Frayne is a writer and artist, living in Muskoka with her husband, a dog and a piano. After a career teaching high school English and Visual Art, she dove into Lake Creativity, and swam; head up, eyes open. Fiction contest winnings include: Muskoka Novel Marathon, Eden Mills Writers Festival, South Simcoe Arts Festival, Stratford Rotary Writers Festival, and NOWW International Writing Contest. Two YA novels are currently under consideration.

She’s published on Agnes and True, CommuterLit and in numerous anthologies. Frayne has exhibited in numerous art galleries, including the NOTL Pumphouse, Burlington Art Gallery and McIntosh Gallery.