In her room in the retirement home, Helen is catching up with her three visitors. During a pause in the conversation, her youngest daughter, Sarah, puts a hand on the mattress and leans forward. “Did you get out of bed today?”

Helen picks up the knitting that is lying on the ruin of her stomach and hands it to Margaret. Her second youngest opens a drawer in the chest holding all that she has left, and places the knitting inside. Then Helen looks up at the ceiling, at the sling mechanism that lifts her from bed to wheelchair, like goods offloaded from ship to dock. The last time she tried to stand up, the bones in her foot crumbled. All her bones are crumbling. She blames her bone loss on the food shortages of the First World War and the anarchy that followed it in Russia. And having six children probably didn’t help, but she has never said that.

“Do you work over there?” she asks her granddaughter Kate, who has come from some far-off country, she forgets which. Kate is here to say goodbye; Helen knows that. Kate has been asking those before-it’s-too-late questions about her life, her past.

“No, I’m doing research, for a postdoc.” Kate smiles as if she expects Helen to be proud of her.

“What are your sisters up to?”

Free. To fritter away the hours snapping photos. Helen looks down at her own hands— empty, veins visible under translucent skin, the knuckle too big to get her wedding ring off. Her hands were red and chafed from work by the time she got to this country as a girl of nineteen. Her people had believed that work was service to God, and that is how she’d lived her life. Working as a maid, as a farm woman and mother, and later as a nurse. Her hands had lifted the flaccid bottoms of old women like herself. She’d baked her own bread and cakes, canned pickles, frozen the fruit from their garden. Now her husband is dead, her children scattered around the world, her house sold, and her hand—idle—is holding Sarah’s soft hand.

Kate palms the railing at the foot of her bed. “On welfare, I think.”

Helen looks at the hands arrayed around her bed—Sarah’s supple hands that fool with ink and paint, Margaret’s hands pale in their early retirement from the library, and the slim hands of Kate (still a student, at the age Helen had borne children and harvested hay).

“Did you get up today?” Sarah asks her mother again.

“And none of you has a job?” Helen responds.

Looking in wonder from one to the next, Helen settles her head into her pillow. She’s not getting out of bed today. She’s not going to lift a finger. 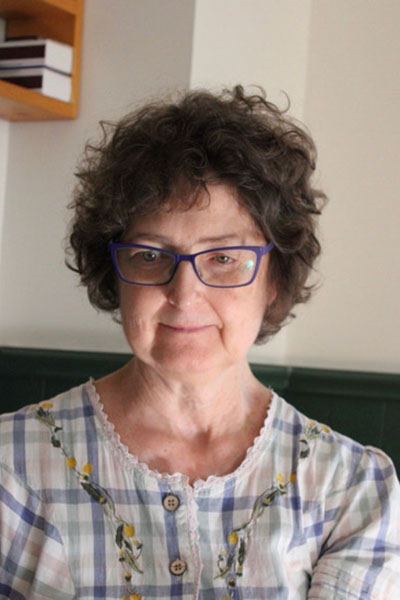