Esther Rose was in the dressing gown that she didn’t change out of until “elevenses”—her homage to Belinda—when “Lesbians Living Alone Lonelier” loomed on her screen.

Her private pain wasn’t unique, but how much more forlorn and friendless was she than those widows, say, whose husbands swelled the morning obituaries? She double-clicked and down the Internet’s rabbit hole she hurried, her coffee tepid before she tumbled upon a new ministry for people just like her.

Before, Esther Rose would have scoffed at “Life Hacks to Beat Loneliness in One Week.” Today, the upbeat tone lured her for a closer read. She sensed goodwill in the happiness academics, from UBC to boot, as if they were fellow mourners offering a sympathetic handshake. If only she could utter something sincere and kind to acquaintances every day, they encouraged her.

The resources section listed www.be-friended.org. She magnified her local chapter’s PDF worksheets; she printed February’s. Never before did she count how often she spoke. Look at you, ER, so taciturn when we met, and now I hardly get a word in edgewise!

She lifted a sugar cube with silver pincers and splashed it into a fresh cup while clearing her throat. “Alright, unwise woman, will you listen now?” Her voice still creaked like a worn floorboard, and it aggrieved her.

Why didn’t she heed the experts? Make no major decisions for at least six months, better yet a year. No, Esther Rose thought she knew best—downsizing to a city where real estate was cheaper, but five hours distant and three degrees north. The polar vortex gripped the population, yet everyone else had bonded over a hardscrabble existence for generations, nowadays working at the reputable but conservative university or the historic prison. Esther Rose never set foot in either.

As light penetrated the kitchen window, Esther Rose surveyed the sidewalk and surmised a fresh five centimetres of snowfall. A woman her age, but with poorer posture, was disentangling her leash from another dog walker’s. Esther Rose drank her second cup before the two creatures, a miniature poodle and perhaps a Scottie, unravelled. The owners kept their physical distance yet continued to chat in the sub-zero temperatures. What more proof of a genuine social interaction—aka “social snacking,” as one infographic enlightened her—did she need? The pair would breeze through the challenge of three snacks per day, if they didn’t freeze first.

When the thermometer climbed to -15°C, Esther Rose began her research out in the field. She located three dog parks within walking distance, as well as a discount pet store 1.9 kilometres away, a mere eleven-minute bus ride. Plain rope no longer cut it. Her first visit to Top Dog was a revelation. She exited within five minutes, thankful her fleecy neck warmer masked her flushed cheeks.

In her toasty kitchen she turned to her iPad and within a few keystrokes, dog leashes coiled themselves in beguiling columns; Esther Rose marvelled at Google’s sleight, invisible behind the screen. All manner of restraints were for sale: retractable, reflective, even an LED collar with a rechargeable USB.

She paid the pet store a second visit, forearmed. “Bella, isn’t it?” Esther Rose squinted closer to the nametag poised above the woman’s blue, uniformed breast. The sales clerk with the brown caring eyes she noted earlier was totting up how much dog kibble to requisition. What life choices had led her to aisle five’s minimum wage exploitation of her compassionate nature? Married too young, left school early?

“It’s Annabel. Did you pick one out then? I could take it to the cashier for you.”

“Beauty in your name, I didn’t forget. How kind. I can’t figure out the hands-free?”

“Oh, those come with the carabiner. See, you hook it like this to this, onto your waist belt. It’s very popular with runners.”

“I see, yes, I do see that now you mention it. And then there’s the, the USB to consider. I really like the neon collars for the dark. In case of running off, and . . .”

“Also very popular. Anything else I can help you with today?”

Esther Rose declined with one palm raised. Annabel turned back towards the shelves, face bent over her device. Esther Rose shuffled around the corner to the next aisle where she replaced each item in her basket on its display hook.

The first assignment without making a fool of herself! Date: February 4. Place: Top Dog. Time: 10:30 a.m. Who: Annabel. How did it make you feel? Esther Rose left her answer blank.

On the following Friday, she put on the kettle at three o’clock sharp, steeling herself for her first home visit. Elise the Be-Friended Coordinator rang the doorbell at ten minutes after, enough time for the tea to steep.

Esther Rose bore the humble Brown Betty teapot on her wicker tray, two cups rattling on their saucers, cucumber sandwiches carved into asymmetrical triangles, three apiece per plate. Assorted cookies stood on standby in packets on the kitchen counter. What if she offended her guest and needed to extricate herself from the horrible silence between strangers? Ginger Nuts would make their entry as her peace offering.
Elise was sitting in the centre of the couch. “I thought I detected a slight accent. You’re from which part of England?”

“I did my doctoral work at the University of Sussex, but I’m Canadian.”

Elise thumbed her cellphone. “Ah yes, Women’s Studies. How interesting. My grandmother on my mother’s side was a war bride. I forget the name of the village. I’d love to visit. Who knows? Some day! Unfortunately, I never got to meet her.”

Elise looked up from the screen. She assumed an expression of neutrality, a prerequisite for her position, Esther Rose suspected.

Elise must’ve skimmed over the personal details, the boxes for grandchildren, their ages and names blank.

“Don’t be. I meant to say that grandmothers are ubiquitous.” Esther Rose’s hands shook as she poured. “I seem to remind everyone of their grandmothers.”

“You’ve really been industrious about checking off one interaction per day. The best total I’ve seen. Don’t feel you have to overdo it, though.”

“My area of research was women in sports, gendered perceptions of competition; I zeroed in there because I am, well, competitive?” Esther Rose noted the apologetic intonation and repeated her last word. Good lord, how many women her age still blushed? She forced herself to keep her gaze resolute.

“Well, I think the point is more to break isolation and not to rack up points.” Elise smiled. “It’d be nice if you could join us in person. The meetings are low-key, and they are a pleasant bunch of—”

“Loners?” The word popped out before Esther Rose could stop herself. “Like me, I mean. Shut-ins by disposition.”

“Solitude seekers with a little too much time solo, social butterflies widening their net—it’s a real mix. I think you’d find someone to chat with or even a kindred spirit, perhaps. I’ve seen it happen.”

“I will think about it. But for now, any interaction is . . . It’s helping me to have something to do.”

“Yesterday you popped in again to Top Dog? You’re very good to drop in regularly.”

“Well, Annabel is quite lovely trying to help me find the perfect leash. I hope I don’t remind her of her granny. May I top you up? As for . . . I just don’t think I’m up to heart-to-hearts, not yet anyway?”

“Of course. No obligation whatsoever.” Be-Friended Coordinator’s shoulders lowered a fraction as if preparing for a stranger’s unburdening, doubtless part of her training.

Esther Rose told herself not to shed a tear on either.

“Did you have a dog before, then?”

“God, no! Belinda was allergic.”

Elise should’ve attended to the personal details, or did she herself forget to check her marital status?

Esther Rose’s omissions were long-standing. My friend and I . . . Never married. “Someone I met over there.” She closed her eyes. Someone I met, the love of my life.

“We met at a gallery where she curated . . .” Esther Rose wrapped both hands on the teapot, her index fingers joining under the spout where she’d worn a hole through the knitted tea cosy. “She was doing a post-doc on women’s handicrafts. Oh, but I won’t bore you, dear, with this old yarn.”

“Not at all, I love listening to people’s stories. That explains the accent.”

Esther Rose almost smiled. Belinda, despite living in Canada for years, never lost hers, and it bled into Esther Rose’s accent after Belinda sent her the tea cosy by surface mail with characteristic foresight. Esther Rose needed a reminder of how to keep things warm, their first Christmas apart. Scarberia—the evocative nickname of her childhood home in Scarborough, where Esther Rose still felt forsaken in Toronto’s hinterlands—bore Belinda’s handwriting in festive green and red.

The correct postal code delivered the tea cosy on Christmas Eve, the snazzy wrapping paper under the parcel’s nondescript brown glittering “Esther Rose” in silver sparkles. She remembered it like yesterday because in that moment she knew that she—they—wouldn’t make it long distance. She cut short her visit to her folks, citing some academic kerfuffle, flew to Gatwick Airport on New Year’s Eve, knelt on Hampstead Heath, New Year’s Day. Decades spun by before they were permitted to officiate their vows.

“So many wonderful memories I’m hearing. Now, I hate to cut this short but . . . It has been a real pleasure, Esther Rose. I have to be getting on to my next meeting. Thank you so much for the tea. The sandwiches were delicious, so thoughtful.” Elise brushed her crumbs into her linen napkin. “I can’t wait until next time, and until then, it’s drop-in the first Tuesday of the month. You’d be more than welcome to join us. I know you’re not a joiner, but there are others who feel the same way. I promise.”

Esther Rose stood on the perimeter outside the dog park, eavesdropping as she always did. She felt like an outsider, never included in a crowd. Belinda said everyone felt like that initially. It only takes one step, and you’re in.

She didn’t want to retreat to her mid-thirties, the person she was until she formed words for Belinda. You just have to find common ground.

The flurries multiplied and whipped her exposed face; she was grateful for the heat pads stuffed inside her boots and mittens. She removed the small Snowdrop dog leash from the pocket in Belinda’s frayed duffel coat.

Esther Rose braced herself against the Arctic windchill and lifted the first of two gate latches. No one looked up from their phones when she positioned herself by a maple beside the hedged, snowy fence. If questioned, she was researching dogs. How old is he? What is she? So many running amok, no one doubted she lacked a faithful companion herself in this weather, surely. She looked harmless, someone’s granny. She stamped her feet in readiness. You just have to find common ground. 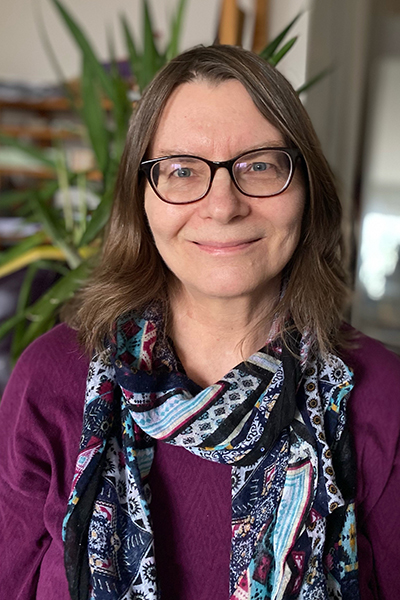 Valerie Free grew up at the foot of the South Downs and by the sea in Sussex, England. Her writing credits include poems in journals such as CV2, Canadian Woman Studies, and Lunate. Her fiction received an Honourable Mention in a CBC/QWF short fiction contest and was published by Véhicule Press in Short Stuff: New English Stories from Québec. She is a member of London Playwrights’ Workshop and lives in Montreal.